One late night of January 2013, I had a little bout of anger. The culprit: these badges I was starting to notice all over the place on open source project README files. The idea behind the badges was great: provide useful metadata regarding how well tested the project is, whether those tests are passing or not, how well factored the codebase is, etc. Yet, most of these badges seemed were lazy clones of each other. Worse, it seemed like each new copy turned out uglier. Somehow, the people making these badges had managed to achieve “perfect” visual inconstency. It didn’t seem to shock anyone. Perhaps, maintainers didn’t care or couldn’t tell the difference. 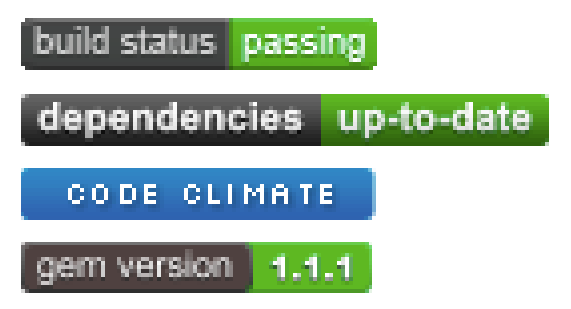 Some of these badges weren’t helpful at all. They looked a lot like stealth advertising for the third-party services powering them. Instead, they could have been focusing on providing actual value first, and profit from people clicking on the badges to discover what was providing this useful info.

Basically, the badges were often neither functionally optimal nor aesthetically pleasing. I saw a missed opportunity there. So, despite my rusty design skills, I hopped into Photoshop. Some time later I emerged with a rage diamond. It was a simple Photoshop file with a badge template that I took the time to design properly: consistent padding, a more legible typeface despite a similar font size, better contrast, softer colors, a more subtle gradient, etc.

I called the project Shields as a nod to one of the greatest TV shows of all time — The Shield — and because in the US, a police officer’s badge is sometimes referred to as their “shield”.

Over time the design for the badge evolved. It became good enough that people started paying attention to my little project. The maintainers of Travis CI, Gemfury, Code Climate, Coveralls, Gittip, Gemnasium, and more became involved. Many of these vendors asked us to design a badge for their service, or for help integrating the design into their service by generating PNG files for them.

After some much needed help from Nicholas Acker with an SVG template, we started toying with the idea of an API that would generate badges on the fly based on a key, a value, and a color. It seemed obvious because people were already implementing their own internal APIs to generate them for their service, why not provide a centralized one and never have to crank out PNGs and SVGs by hand?

One issue that caught us by surprise was how poorly the badges (being PNG bitmaps looked on high density (or “Retina”) displays because none of us had a swanky Retina MacBook Pro at the time. Thankfully Kyle Neath from GitHub chimed in and we quickly came up with a temporary yet satisfying solution.

Thankfully the API idea meshed quite well with the resolution issue because SVG images scale to any resolution and they adapt to the pixel density of the screen. Through a slightly tortuous path that took much longer than we anticipated, less than a year after my original rage diamond people in and around the Shields community converged and shields.io was launched thanks to the help of many contributors including Thaddee Tyl, Mathias Bynens, Chad Whitacre, Nathan Youngman and many more.

This API has yet to be as widely adopted as the original PNG Shields badges have been across much of the open source community, but I consider this second major phase of the project a great success. Adoption of the API is slowed by the fact that many of the services (Travis CI, Code Climate, etc.) for which we originally produced badges have since created and hosted their own versions. They obviously couldn’t wait for us to release this API. Now, many of them understandably don’t want to depend on a third-party API to provide a badge feature to their users, which is understandable.

Until all these services get around to updating their websites and internal badge generation services, we will see inconsistencies because the new SVG badges don’t look exactly the same as the first generation.

I’ve wanted to avoid this since inconsistency is what led to this rage diamond in the first place, but it’s alright. In the end my goal with this project was surpassed by a few lightyears. I’m still amazed when I visit the repos of some of my favorite open source projects and discover that little badge design I put together in Photoshop a year ago.

Shields is also the most successful open source project I’ve ever been involved with in a major way, and for a while it didn’t contain a single line of code. I think design-savvy developers and designers have a lot to contribute to the open source world, and Shields is my proof.

Although the initial impulse for this project was frustration, I think my fellow contributors and I have had a non-negligible impact on the open source community. I’ve spent hours talking back and forth with people involved with the services that fuel the data displayed on the badges. Through these conversations, I’ve convinced nearly all of them to focus on semantic clarity (how the badges are named and the data expressed) and the value they provide to end-users (the people who use and contribute to open source projects).

Even though they break the visual guidelines I had originally established, I couldn’t be more proud of seeing new takes on Shields-style badges like Inch Pages. These folks took the concept and tweaked it in order to display far more dense data than I ever thought possible.

In the end, when I find projects READMEs like the Twitter Gem’s, I’m really happy because there is now so much more valuable metadata available at a glance for someone who’s just discovering the project, or even someone who’s coming back to it.

Shields.io allows open source projects like this to be more transparent and approachable. It also makes it easier to tell what their maintainers care about, by showcasing: