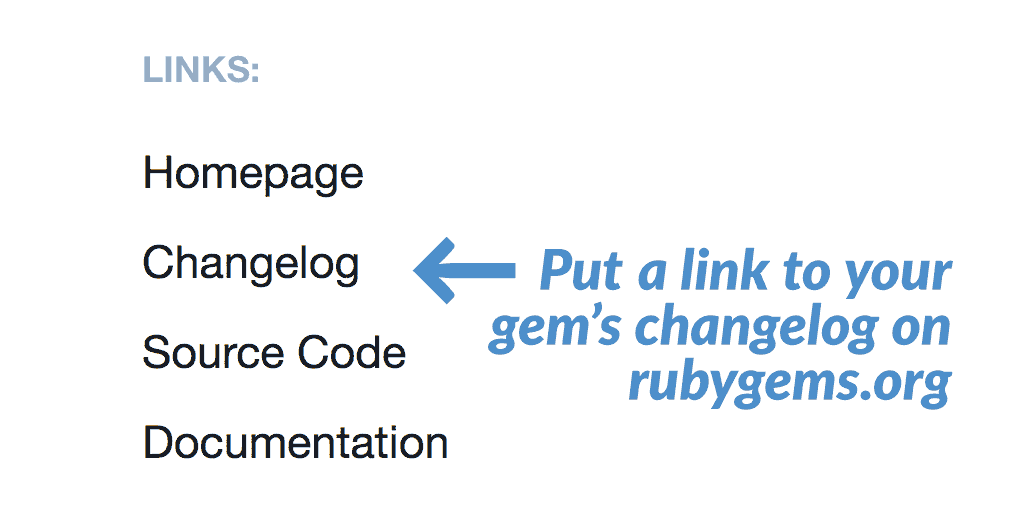 Did you know that changelog URLs have been valid metadata since 2017 on RubyGems.org? If you maintain a gem you can now make it easier for your users to find out what’s changed in a specific version.

You can easily update your gems’s .gemspec to point to a rendered or plain text version of your changelog using the changelog_uri key in the metadata hash, like this:

You can use the metadata hash for a lot of other URIs relevant to your project like homepage_uri, source_code_uri, and bug_tracker_uri.

Note that I’m using the GitHub URL for the changelog above when a link to the raw source would have worked just as well. Since good changelogs are made for humans, I strongly recommend you point people to the rendered HTML output of a nicely formatted Markdown (or other markup source language) changelog.

It’s also fine to link to a project website that formats the rendered output from the project changelog, like Ember does. You can even link to the GitHub Releases page if you generate release notes using git tags on GitHub.

What’s great about the way Keenan Brock implemented this feature compared to my original proposal is that along with other gemspec metadata, the changelog URI can be different between different versions of a gem.

This means that if your project has version-specific changelogs files, you can point people who look at version 0.1.0 on rubygems.org to a changelog-0-1-0.md file that only lists changes within this minor version.

What if your project doesn’t have a changelog? Or if instead you simply point people to git diffs of the commits between each version.

About a year after making the original pull request to add these changelog links to RubyGems.org, I created keepachangelog.com. Give it a read if you’re not sure what a changelog should contain or why you should keep one for your project.