Concurrency in Ruby 3 with Guilds

Note: Since this post was written four years ago, Guilds were renamed Ractors and were released as an experimental feature in Ruby 3.0. The feature now includes great documentation and copious usage examples in the Ruby API documentation.

At Ruby Kaigi 2016, Koichi Sasada — designer of the current Ruby virtual machine and garbage collector — presented1 his proposal for a new concurrency model in Ruby 3.

While Ruby has a thread system to allow for concurrency, MRI doesn’t allow parallel execution of Ruby code. Koichi looked at the various challenges of running Ruby in parallel including object mutation, race conditions, and synchronization across Threads. The result was a proposal for a new concurrent and parallel mechanism called Guilds.

If like me you’re not a computer science graduate, or if concurrency just tends to hurt your brain, you can read this clear explanation of the differences between concurrency and parallelism.

Concurrency in Ruby today is difficult because programmers have to manually ensure that Threads don’t create race conditions. Common ways around this issue involve introducing locks, like Ruby’s Thread::Mutex, which somewhat defeat the initial purpose of parallelism. Locks tend to slow down programs, and improperly placed locks can even make concurrent programs run slower than synchronous equivalents.

Note: With Koichi’s permission, I’ve reproduced some illustrations from his proposal since they’re helpful for understanding the concepts.

Guilds are implemented in terms of the existing Thread and Fiber classes. While Threads allow for concurrent execution of code scheduled by the operating system scheduler on your behalf, Fibers allow for cooperative concurrency with execution scheduling that can be manually controlled.

Guilds are composed of at least one Thread which in turn has at least one Fiber. Threads from different Guilds can run in parallel while Threads in the same Guild can’t. Objects from one Guild cannot read or write to objects from another Guild.

Threads that belong to the same Guild can’t execute in parallel since there’s a GGL (Giant Guild Lock) ensuring that each thread within a Guild executes one after another. However, Threads from different Guilds can execute in parallel.

You can think of a Ruby 2.x program as having a single Guild.

An object from one Guild will not be able to read or write to a mutable object from a different Guild. Preventing mutation allows Guilds to operate concurrently without running the risk of both accessing and modifying the same objects.

However, Guilds can communicate with each other using the Guild::Channel interface which allows for the copying or moving of objects across the channel to another Guild.

The Guild::Channel’s transfer(object) method sends a deep copy of the object to a destination Guild.

It’s also possible to completely move an object from one Guild to another using Guild::Channel’s transfer_membership(object).

Once an object’s membership has been transferred to a new Guild, it is no longer accessible from its original Guild, and any attempt to access the object will raise an error.

While Guilds can’t share mutable objects without previously copying or transferring to one another, it’s important to note that immutable objects can be shared (read) across Guilds as long as they’re “deeply frozen”, meaning every object they reference is also immutable.

Here’s an example to distinguish mutable from immutable objects:

During his talk, Koichi Sasada gave a few succinct examples of how Guilds could work. I’d like to reproduce the simplest one that applies Guilds to computing Fibonacci in parallel. The example below has been modified slightly for clarity.

Advantages of Guilds over Threads

With Threads, it’s difficult to figure out which objects are shared mutable objects. Guilds prevent their use altogether and instead makes sharing immutable objects much easier. Koichi has planned for “special data structures” to share mutable objects with Guilds. These structures would automatically isolate risky mutable code.

There is, however, a trade-off, since communication between Guilds is much more tedious than between Threads.

It’s my understanding that the current C implementation of Guilds is roughly 400 lines of code. While the source isn’t yet available, Koichi hinted at the performance benefits of Guilds by comparing a single-guild execution of the fibonacci example with a multi-guild one. 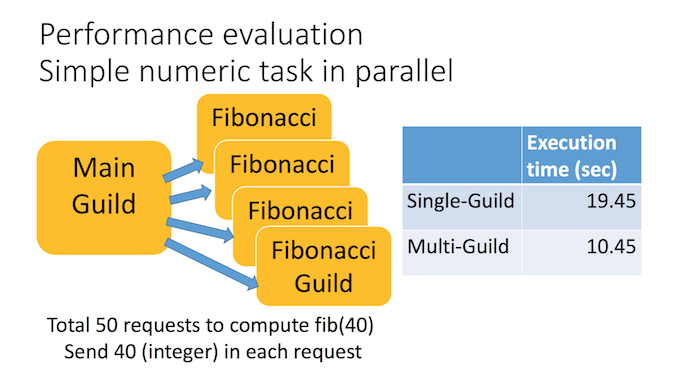 It may not be representative of real-world improvement in most Ruby applications, but I can’t wait to see the impact of Guilds on RubyBench.

The Guild concept is an exciting way to introduce easier mutation-safe concurrency workflows to Ruby. I can’t wait for Koichi Sasada and the Ruby core team to share more about this proposal in the future.

I do have minor concerns about the naming of the object copy and move methods for Guild::Channel. transfer(object) seems to imply an exchange, but it merely results in a deep copy of the object. I believe transfer_copy(object) or simply copy(object) would be less confusing. And transfer_membership(object), the move/transfer method, could simply be named channel.transfer(object). Thankfully, it seems that the method names aren’t set in stone.

I’d encourage the Ruby core team to release this new feature under an opt-in experimental flag so that the Ruby community can participate in testing. Hopefully, this would allow us to have this feature available before 2020 — the expected release date of Ruby 3.0. Guilds will have a positive impact on Ruby’s reputation as a concurrent-friendly language. It would be welcome soon, warts and all.