I recently replied to a friend, as a response to her reaction to this admittedly imperfect article from the Washington Post’s opinion column entitled Why do Americans still dislike atheists?. Here’s her response:

I think that if you remove the group of people for whom the rules of their religion are so central to their being that that have all sorts of hatreds, and instead look at what is uncomfortable about atheism for the large group of reasonable people who remain, the answer would be that people dislike extremism of all kinds. Atheism is as extreme as fundamentalism. It’s not nearly as harmful, but ideologically, it is as extreme. For atheists and fundamentalists, the question is answered. For everyone else, there is a long way to go.

And here’s mine to hers:

Atheism is the absence of religious dogma, it couldn’t be more different than fundamentalism which implies the strict orthodox application of religious dogma without concern for modern society. Atheism is absence of a doctrine, without doctrime there is nothing to be “fundamental” about. That’s about it. How one could even begin to describe that as extreme boggles my mind. But if you can make a solid argument as to how exactly, I’ll be sure to listen.

As many atheist choose to describe it, Atheism is about as extreme as refusing to believe that there is Flying Spaghetti Monster out there in the universe because you can’t prove to absolute certainty that there isn’t. It just happens to be extraordinarily unlikely.

Now if it is extreme to find reality sufficiently elegant a companion that one doesn’t wish to agree to the existence of supernatural beings with powers defying just about every law of nature for comfort or sense of meaning, I’ll gladly join the fundamentalists, I’m they will be as open to logic and reason as I am.

That said, I almost wish Atheist were despised for their extremism as you believe it would be easier to dispell. In truth many Americans think them without morals whatsoever because they cannot conceive of morality or ethics without religion.

Bear in mind, this is not to say that there aren’t extremist atheists (quite a difference here) and misguided ones. I’ve met a few of them and most often in and around campuses here. Many of them were recent apostates who are enraged enough to draw generalizations and behave in a way that is not condoned by anyone civilized (religious or otherwise).

But if I could leave you with a lasting thought it would be the revealing discovery recently that self-described Atheists & Agnostics were found to be more knowledgeable about Christianity, the Bible and other world religions than any other group of religious Americans. If this doesn’t make you doubt your assumptions about Atheists, nothing will. Opinion based on knowledge isn’t extreme, it’s reasonable. 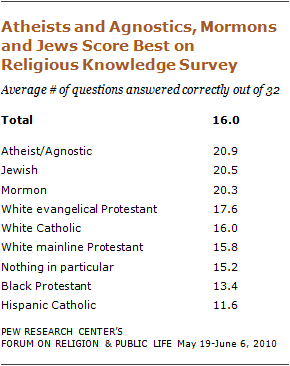 PS : I found this thorough takedown of the fallacious argument I tried to quickly tackle above on Atheist Revolution blog after I wrote my response. I think it covers all the bases I didn’t and still addresses the (rare for now) case of atheist extremists.