It’s strange how many people who work or communicate in a distributed fashion treat the transmission of their voice as an afterthought.

My audio setup is a bit excessive for most people. You would probably be better served by something as pricey-yet-simple like AirPods. Despite their size, they carry a surprisingly decent microphone, as do EarPods. And unlike a serious microphone setup, you’re much more likely to carry them with you when you travel.

There are, however, some noticeable drawbacks to AirPods:

Large image sensors tend to produce drastically better image quality on digital cameras. Large microphone sensors (capsules) similarly produce noticeably better audio quality. These microphones don’t have to be incredibly expensive and they will dramatically improve the impact of your voice when it’s sent across a wire to another person.

Your voice will be clearer, more life-like, and the modulations of your speech will allow you to stand out when you speak. Especially compared to speakers who are communicating through a tin can of a microphone. You already know the value of a good headshot, or maybe you’re aware of the importance of good lighting with webcams, but microphones are recording the actual message, not just the medium. They matter a lot. 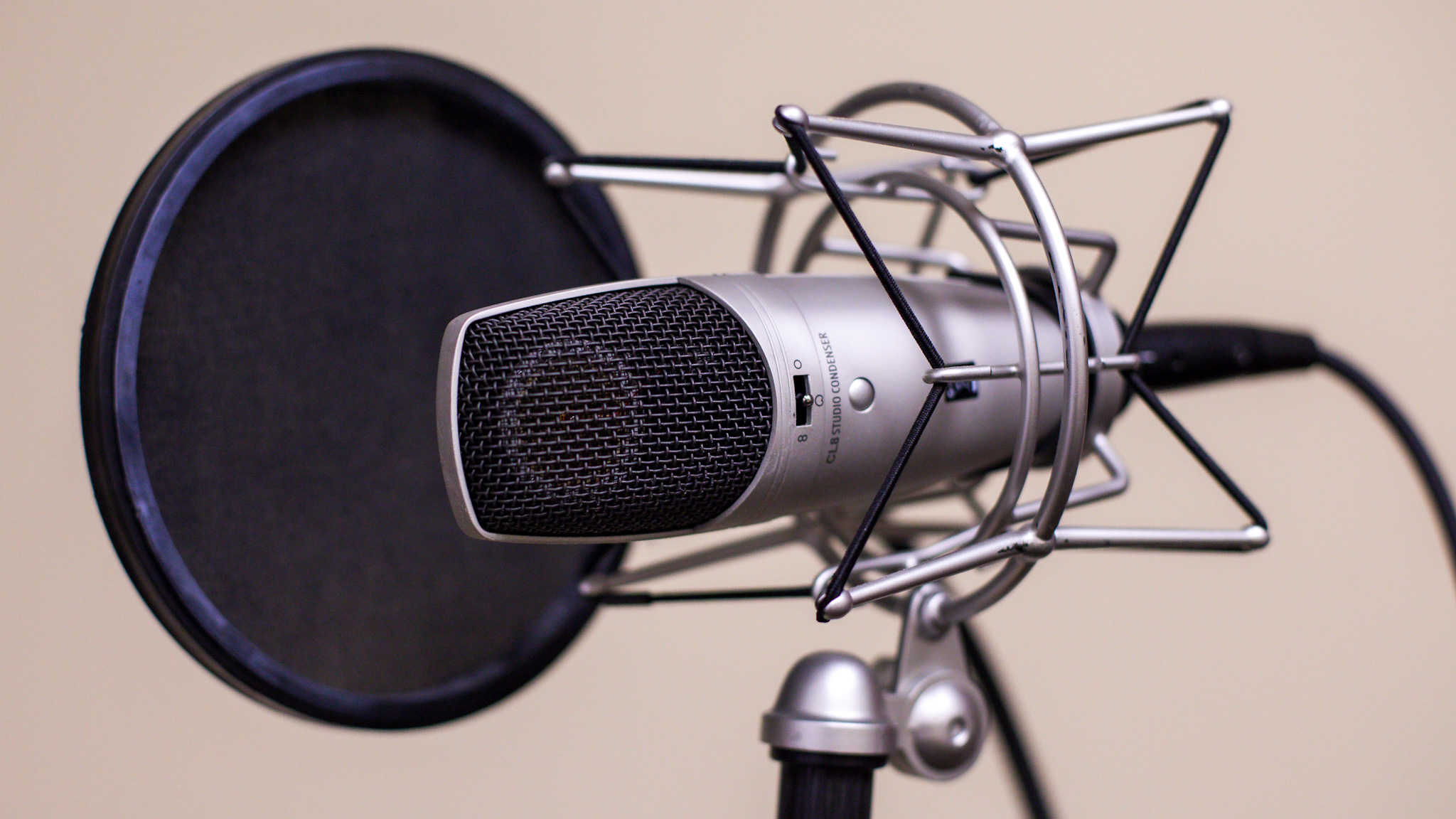 The microphone I use most of the time isn’t that impressive. It can be found new for as low as $70, and even less used. But don’t get fooled, you can’t use it without some accessories I’ll go into later.

It’s an old Samson CL8 cardioid microphone from the now bygone era when we hosted podcasts weekly at Envy Labs and Code School. It’s a workhorse and it’s been working without a glitch for at least a decade. We routinely used it for voice-over work on screencasts.

Cardioid microphones like the CL8 have a very narrow pickup pattern: the area where the microphone actually receives audio input. That makes them great at isolating sound, especially if you learn decent microphone technique. The capsule inside of the microphone receives vibrations from your mouth hole and converts them into an analog signal. Because of the fairly sensitive capsule, the CL8 is quite sensitive to plosives (P, T, F, D sounds) but it’s nothing some care or a good pop filter can’t prevent.

As an analog output microphone, the CL8 ends in a male XLR connector which means it requires an XLR to USB audio interface to convert the signal into a digital one. I use the simple and mostly user-friendly Scarlett 2i2 (2 inputs, 2 outputs) which is about as small as these things get. The 2i2 includes a decent preamplifier (“preamp”) that allows you to increase the gain (sensitivity) of the mic with hardware but also to receive live monitor feedback from the mic.

When I said you can’t hear yourself when speaking into AirPods, this is what I meant. With live monitoring, you hear how you actually sound to your audience. This feedback look is immensely valuable to improve your microphone technique. It’s especially useful when recording screencasts, participating in calls or podcasts, and surprisingly when writing. You end up hearing your words as listeners would and it’s much easier to write something that flows well. I use it constantly to edit my own writings.

I highly recommend a desktop boom arm like the RODE PSA1. It lets your microphone float over your desk and follow your mouth without requiring you to stand awkwardly near the mic. Mine is paired with a Samson SP01 spider shock mount. Since the boom arm is clamped onto my desk, any typing or involuntary finger drumming I do while recording would otherwise easily transfer as vibrations to the mic. Some folks use pop filters to reduce plosive sounds since those can hold back some of your breath to prevent loud popping sounds. I find them unwieldy and I’ve managed to become good enough at avoid blowing air directly into the microphone capsule so I’ve stopped using them, but you might find them useful at least at first considering how cheap they are.

You can probably tell at this point that this all requires a serious level of dedication to sound quality, similar to espresso nerdery. As with any domain, you can always simplify the setup by spending a lot more money. You can also easily spend yourself into diminishing audiophile returns. My alternative microphone setup requires no shock mount, or pop filter, but it does require additional signal boosting.

The Shure SM7B is often used in radios because it’s incredibly easy to use. You can get insanely close and you won’t cause pops by saying words with plosives or even blowing into the mic. That’s because, as a dynamic microphone, it’s designed to record loud sounds like instruments or singers. Instead of a capsule, it uses a wire coil inside of its elogated body and you talk into the end of it rather than a side as you would with condenser microphones like the CL8. This means the microphone technique is similar to what you’d do with a handheld singing microphone like the kinds you’ve probably used at karaoke.

The SM7B comes with an internal shock mount so it doesn’t need any spidery-looking contraptions to avoid picking up vibrations from your desk. I still use a Scarlett 2i2 to interface with my computer since it also uses an XLR cable instead of USB, but I also need an additional amp since its base signal is very quiet (it’s usually used with expensive audio capture equipment which includes powerful signal processing). The easiest solution for this is the Cloudlifter CL-1 in front of the Scarlett 2i2. The RODE PSA1 boom arm works just as well for that mic since the thread on the back is compatible.

Wireless vs. Condenser vs. Dynamic Microphones

You can always find cheaper setups, and I’ve recommendded some in the past for distributed co-workers and acquaintances. For instance you’ll find $60 kits on Amazon with a cheap cardioid mic, shock mount, pop filter, and arm. These will feel like great deals because they’re all-in-one. But you’ll quickly realize those often don’t have live monitoring or any hardware gain/volume control. This means you’ll end up spending a lot of time fiddling with software sound input controls (worse, at the OS level) and you’ll likely struggle to get a sense for what you sound like. So be warned.

No matter how much money you spend, if you don’t spend more time learning how to use the tool, you’ll be pissing money down the drain.

A $3000 double boiler espresso machine is a marvel of engineering but in the hands of someone who isn’t interested in learning the ins and outs of coffee making, it’s just a hulking heap of metal that draws 1000 watts of power and constant comparisons to the wasteful ease of a K-cup trash printer.

I first got interested in microphones in 2010 when I bought my first Yeti from Blue Microphones (skip it). Ten years later and I’d say I’m competent with most of the variables of voice recording:

The capsule inside of your microphone is like a partner’s very sensitive eardrum when your mouth is centimeters away from it. Stop. Yelling.

Listen to some of the greatest podcasts out there: Radiolab, Serial, 99% Invisible, Criminal. One thing you’ll realize quickly is how airy the voices of their hosts are. Jad Abumrad and Sarah Koenig in particular actually sound earnest. It might sound absurd, but just as you can hear someone smile, so can you sound honest and authoritative if you do the right thing. 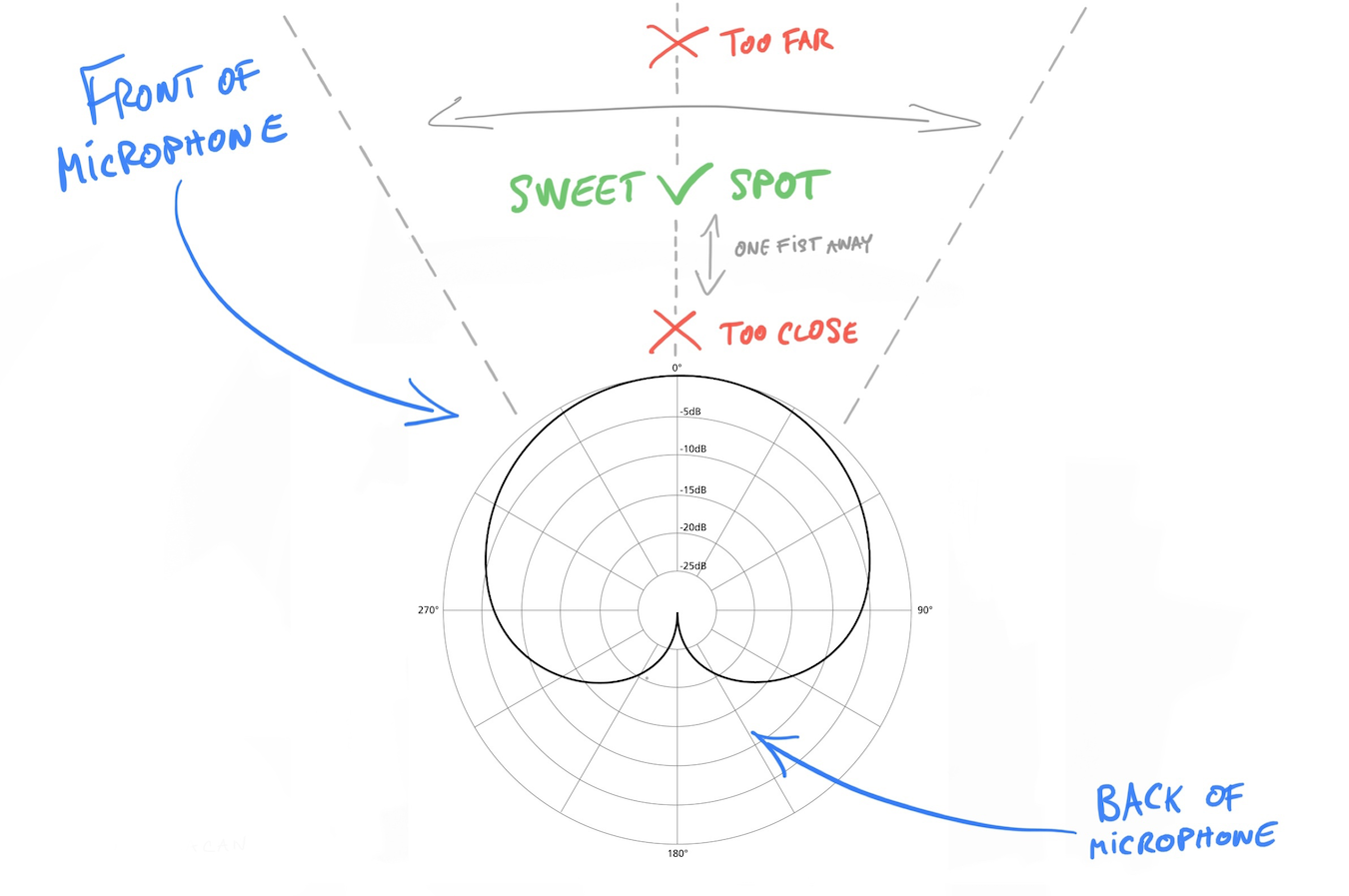 The sweet spot will vary depending on the timber of your voice but my rule of thumb for most people is “a fist away” because it’s easy to measure. The size of your fist doesn’t matter than much.

An easy trap to fall into when you get into serious voice recording gear is accoustic room treatments such as foam, bass traps, and even recording booth kits. The whole point of cardioid polar pattern microphones is that they already ignore much of a room’s reflective noise. Unless you record in the largest and most reflective (tile, glass, hard and wide surfaces) room, you probably shouldn’t worry about accoustics until you have an unmistakable sound reflection/echo problem.

Finally, remember that your body will affect the way you sound. Try placing your microphone higher than your head on the boom arm so you don’t slouch to speak into it. Keep water nearby so you don’t sound parched and raspy. There’s nothing worse than the high fidelity sound of someone sticky jowls. Nasal congestion will ruin your diction. Learn to decompress your sinuses or keep some safe nasal decongestant around. And if you find yourself slurring, stretch out your mouth muscles a bit with some diction excercises (“Unique, New York”) to relax these muscles and help you articulate.

I’m sure it sounds like a lot in the aggregate, but these are not things you have to do all at once. Microphone technique can help someone using corded EarPods and other crappy wire-mounted microphones. You can start small. But if you do anything about the way you sound, make it recording yourself and listening back to how you sound to people who aren’t in the room with you. It will give you a great idea of how much room for improvement you have.

Note: you can go a long way with great sound, but sometimes watching someone’s facial expression when they speak – and when they don’t – can make all the difference in the world. I wrote a follow up to this post on the topic of webcams and how to make them suck less.