Recently I completed a Rails 4 upgrade for codeschool.com which I originally started in the fall of 2014. Almost two years to upgrade from Rails 3.2 to Rails 4.2. 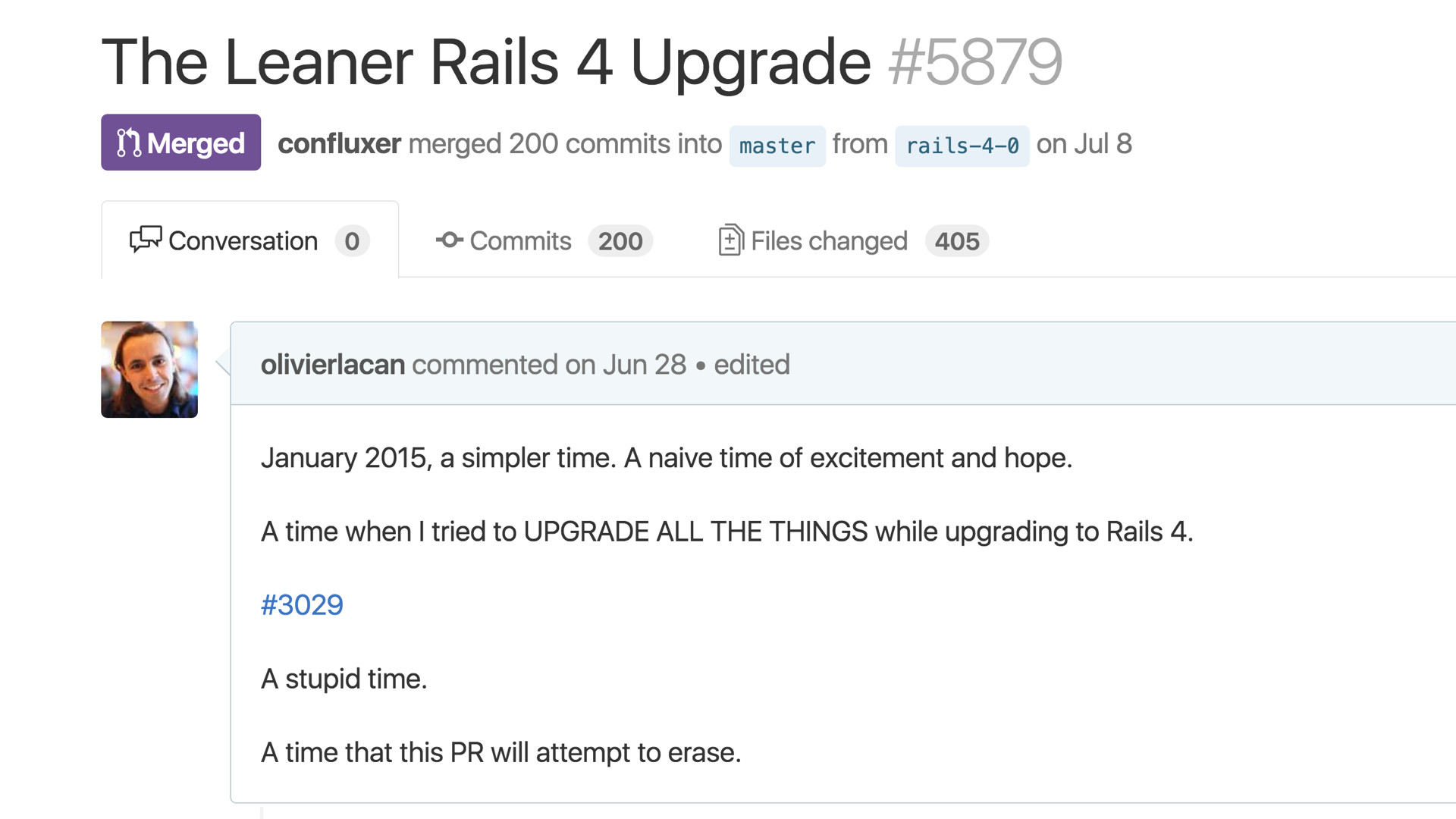 What took us so long? Why didn’t we do it faster? Are we just really bad at upgrading things? Do we not care about security? Is it because Rails can’t scale? Or maybe Rails 4 is bad?

Eventually, if those terrible things don’t surface in bugs or build failures, you end up paying the price for them on the upgrade trails. The circuitous, slippery, and depressing paths that you can barely see when you’re riding high on the shiny new Rails.

I didn’t spend most of those two years working on these upgrades, of course. Deplore it if you will, framework upgrades are not always a business priority. In my mind they should be because updating often means avoiding getting the short end of the stick with bug fixes. Most important bug fixes are backported to earlier minor versions of frameworks like Rails — some slip through the cracks.

Over time, the body of knowledge surrounding the software your business depends on the most grows stale. People drop support for the version you use in their test builds. Gems stop trying to fix compatibility issues with it. Framework contributors and maintainers accidentally break or deprecate features you came to rely on. Features you’ll have to rewrite in order to upgrade.

On the scarier side, you don’t realize that you’re missing out on some new security features that — while they wouldn’t require a security release that would be backported to your older version — still leave you and your customers a little less safe than the folks on the bleeding edge.

You hear about performance improvements in your ORM and you eagerly start building internal apps using the new version of the framework in order to giddily confirm that yes — it’s much, much faster. You convince yourself that this internal app side project written in Rails 4 and kept up-to-date with every minor release since will better equip you to upgrade your shining 30,000 line of code monolith — but it won’t. No “greenfield” app can ever allow you to judge how a “reddungeon” app will behave on the upgrade trails.

Things will break deep down at what seems to be the interpreter level. That is, until you notice that a ridiculously ancient version of the antediluvian acts_as_list gem is attempting to pass hilariously unsupported arguments to a core ActiveRecord method.

You start developing a near-animal instinct about what really causes exceptions when reading stacktraces and this instinct betrays you because you’re still not reading the goddamned stacktraces.

Eventually you start reminiscing on the past two years and boil them down to some recommendations that can hopefully prevent good people from spending as much time as you did on those treacherous trails.

Don’t rush to update to a new version until at least a month (or two) after a major or minor release because one tenth of your 238 transitive dependencies are not compatible yet or their maintainers still don’t know how to losen dependency constraints. Get a pull request and a build going for sure, but wait until that first bugfix release comes out, and maybe a second one.

Don’t wait to update until the following version is released. You will miss out on all the blog posts, GitHub issues, and otherwise fresh conversations of people with similar apps in similar situations and whose experiences you could benefit from. I get that it’s easier for other people to feel the upgrade pain, but it’s time to become a better community citizen. Also your assumption that people who upgrade before you will save you from the weird bugs your app will encounter is flawed. There are always edge cases sitting in the dark waiting for you.

No, I’m not talking about Stranger Things.

Do use every single opportunity (Pull Request) to remove code and drop third- party dependencies. Not because they’re evil, but because they will make you wish demogorgons were real and could take some people away for ever to the upside-down world of wheel reinventing.

Seriously though, go watch that show.

Do learn about new framework defaults as early as you possibly can. Before Rails 5, the only ways you could do that was by making new empty apps, or running rails rails:update, or using RailsDiff. But now you have new_framework_defaults.rb and that’s pretty cool.

Don’t skip minor versions because you really really want to use ActionCable. First off, MessageBus is probably way better. More importantly, you will miss all the deprecation warnings. You know what happens after a deprecation warning? Shit gets removed. That shit that gets removed will be gone and you will cry because your eyes can’t process this many red dots at once and you will think your eyes are bleeding. Yes. They are.

Take any opportunity to turn any framework minor version upgrade into a mini-major version upgrade if that makes sense. From watching Rails 4, I knew that Strong Parameters were coming when I upgraded us to Rails 3.2, so I added the strong_parameters and converted our models and controllers before we upgraded to Rails 4 so we would have one less variable to account for.

Always read changelogs. Keep changelogs. Yeah, those Rails release changelogs are not great because they’re all split between indedepent sub-components of the framework that few end-users care about. Yeah, there should be more end-user friendly entries in the Rails Upgrade Guides but they are still very useful and you never know what you might notice and get ready for before it’s time for the big upgrade. Every Monday I get a rundown of the new versions released for every single dependency we have thanks to Gemnasium. Yes, that even includes the dreaded Bower and npm ones.

Read the news. If you’re not subscribed to Ruby Weekly, that’s the very least you could be doing to keep your ear to the ground. Even better, learn about what the Rails core team is working on by reading This Week in Rails or great podcasts like The Bikeshed. You know what your team is currently working on and will work on for the next few months. So why don’t you have the same curiosity when it comes to the people maintaining your most important software dependency? Want to go commando on this one? Go to RubyConf, RailsConf, and great regional Ruby conferences so you can talk to these people. They are really nice and will gladly listen to you, talk to you, and perhaps even empathize with your upgrade pains or fix regressions that affect you in new releases!

Play with new versions. I started working on an internal app called Orientation while suffering from Rails 5 envy in late 2012 because I felt we needed a better way to document our knowledge dependencies (sense a theme?). It allowed me to learn what we could benefit from in this new version without having to worry about our dependency baggage and technical debt (yet). While I expected our main application to follow sooner, I was still able to keep Orientation in lockstep with all minor and major releases of Rails, which helped a lot with regards to the previous point.

There is no tenth point. You make it. Share your upgrade stories; good or bad. They’ll help people like you and me make better and more informed decisions about upgrading. The community will also benefit because we’ll all talk about and work on making the upgrade process a little better with each new release.

This post was inspired by a talk I first gave at the Orlando Ruby Users Group on August 11th.

Want me to share these Rails upgrade battle stories with your company or conference attendees? You can find ways to reach below.